All Land Rover supported Kingsley Holgate Foundation humanitarian expeditions have a keen geographic and cultural link. Using Legendary Expeditions to improve lives is what Africa’s most travelled group of adventurers are all about. 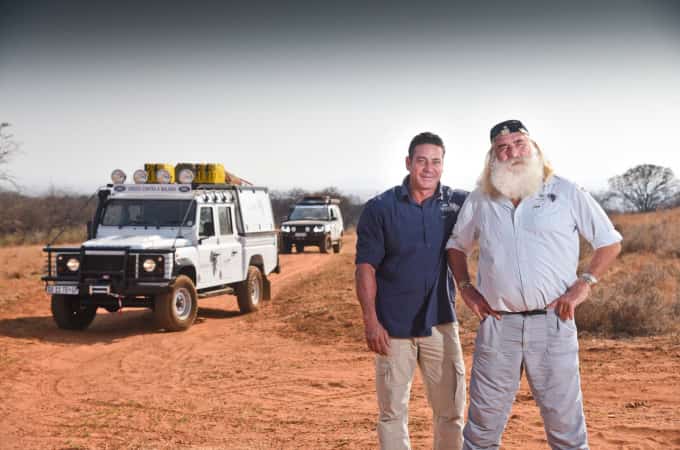 The new objective is clear; heading off in two new Land Rover Discoveries, nicknamed Turkana and Phokot, and the same tough Land Rover Defender 130, nicknamed Ndhlovukazi (The Great She-Elephant) that recently succeeded in the Heart of Africa Expedition, we will research and document some of Africa’s most fascinating nomadic tribes as well as bringing much-needed humanitarian support to people in remote villages in Northern Kenya, Southern Ethiopia and war-ravaged South Sudan.

The three humanitarian initiatives linked to the expedition are:

Having spent much of a lifetime adventuring in every country in Africa, including her island states, the Kingsley Holgate team is keenly aware of the rapidly changing face of ‘Mama Africa’. So whilst Africa still remains one of the last great frontiers of adventure, this expedition will be part of a series of once-off journeys called Africa’s Living Traditions.’ to document, record, research, photograph and participate in Africa's richly colourful traditional cultural practices, many of which are fast disappearing.

"Fully one quarter of the world’s languages are spoken in Africa by at least 3,000 ethnic groups. The Living Traditions canvas is massive, with still so much to document," says Kingsley. And now, on this Land Rover journey through Northern Kenya, Southern Ethiopia and South Sudan, we will interact with some of Africa's wildest and most interesting tribes such as Lake Turkana's El Molo people - considered numerically to be one of the smallest tribes on earth, the colourfully-dressed Rendille and Samburu tribes, the tough Turkana, the Dassanach - first recorded by the explorer Count Teleki Von Szek who discovered Chew Bahir and Lake Turkana for the world, the fearsome Ghabra and the South Ethiopian tribes of Borana, Konso, Wata, Burji and the Mursi, who are recognised by their unique clay lip plates, the lip loop of which, when large enough to fit over the wearers head, demands a bride price of fifty head of cattle. It’s a colourful world of song, dance, body scarifications, traditional dress, and cattle wars.

Our route will take us up the Mozambique coast, through Malawi's warm heart of Africa, north through Tanzania, and on to the badlands of Northern Kenya to follow the shoreline of Lake Turkana - the world's largest desert lake - also romantically referred to as the Jade Sea. From there, we cross into the Southern part of Ethiopia, to a lake formerly known as Lake Stephanie, now Chew Bahir - the great salt ocean - discovered first by the great explorer Count Samuel Teleki in 1888 - who named it Lake Stephanie after his Princess Stephanie of Belgium, the wife of crown Prince Rudolf of Austria. Apart from our ongoing humanitarian work, the geographic and adventure challenge is a world-first attempt to circumnavigate Chew Bahir by Land Rover and land yacht - what an adventure!

How exciting when yet another expedition plan comes together, when scribbles on a map and shared ideas become reality. Rucksacks, boots, medical kit, grub boxes, tents, bedrolls, reference books, maps, spare wheels, jerry cans are scattered all over the place. There’s also our humanitarian supplies of bales of PermaNets for our United Against Malaria work, Mashozi’s Rite to Sight spectacles are carefully packed by size, and the boxes of LifeStraws for safe drinking water as well as Elephant art materials. So much to do on our way North up to Chew Bahir.

In keeping with the Living Traditions theme, Lesedi Cultural Village situated within the Cradle of Humankind will host one of the greatest ever African cultural send offs ever experienced for any expedition. Departure date is set for the 22 June 2016.

"As always", says Kingsley, "There's that feeling of nervous anticipation in the pit of my stomach, not knowing quite what to expect. These volatile areas that we are going to are not called the badlands for nothing… Gunmen from South Sudan's Merle tribe have, for example, just recently killed 140 civilians in a raid on Gambela's Ethiopian border with South Sudan. But in the words of the great Scottish explorer, Joseph Thomson, "He who goes gently, goes safely; he who goes safely, goes far." We believe that the Zen of Travel will continue to guide us…."