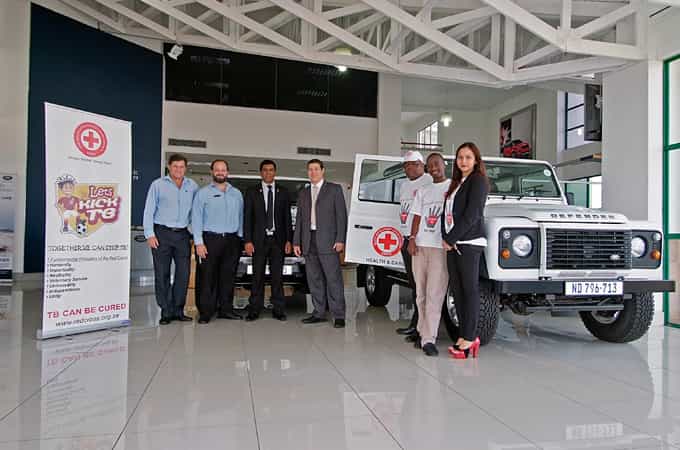 The donation is part of Land Rover’s long-standing support of the work of the International Federation of Red Cross and Red Crescent Societies (IFRC) through a R275-million, five year, programme entitled “Reaching Vulnerable People Around the World”.

“Land Rover is committed to its partnership with the Red Cross, from providing monetary support, to the use of our highly capable vehicles,” said Richard Gouverneur, Managing Director of Jaguar Land Rover South Africa and sub-Sahara Africa. “Today, that partnership continues, and I am confident that the Defenders we are handing over will be used to bring aid to those in even the remotest locations.”

Derick Naidoo, SARCS CEO thanks Jaguar Land Rover for the donation of the vehicles in addition to supporting health and care programming in South Africa. “The donation will help us reach and support more TB and HIV infected beneficiaries in KwaZulu-Natal”, he said.

Over the last nine months one of the major projects for SARCS has revolved around prevention and awareness of both HIV and TB in rural communities of KwaZulu-Natal, where some of the highest infection rates are seen. In the past year nearly 90,807 people were reached through prevention messaging, training, support and care. An important component of the programme is the SARCS peer education model. Peer educators between the ages of 18 and 35 are used to reach out to their communities and local schools, providing training and raising awareness of life skills, gender based violence, sexual reproductive health, adolescent development, HIV and TB. Through this, 2014 has seen in excess of 31,000 young people reached through peer educators.

Both peer educators and community caregivers assist in dispelling misinformation around the spread of HIV, and also provide advice on how best to combat the disease. Most importantly, members of the community are encouraged to undergo voluntary testing to determine their HIV status.

To provide client access to clinics and health care services in six municipalities across the province, Land Rover South Africa supports the client transport fund to ensure clients are able to get to local clinics and collect treatment. Last year an additional 1,865 beneficiaries were added to the growing list of people who make use of this service.

As a result of continued efforts in the area of HIV and TB prevention and awareness, the local communities in the serviced areas have been able to lead healthier lives. The programmes have also helped to improve the economic conditions in the target sites, initially through establishing food cultivation gardens to assist in income generation.